My First Brush with Death: The Freak Car Accident

I have finished writing a book, which I hope will be published soon, about my personal experience with miracles. I started this blog to share with you some of what I consider to have been divine interventions in my life. I will be posting excerpts from my writing but I begin here with the more recent ones that are not in the book

Once in a blue moon I’ll trip and fall, and about every ten years or so I may have a fender bender. But all in all, I do not consider myself accident prone. In 2016 I had two freak brush-with-death accidents that, as I think about them now, still evoke anxiety, awe and gratitude for being saved from death. It is life changing when you come that close to being gone in a snap. The fact that I am alive today and sharing these experiences with you has many witnesses and people close to me calling both harrowing events miracles.

I begin with the car accident that occurred on February 9th. 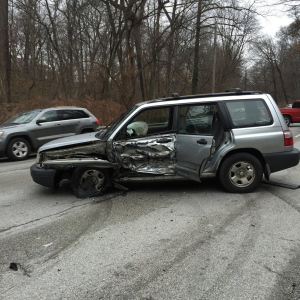 I’m driving on Lincoln Drive, on my way to bring Greek avgolemono soup to my wonderful 95-year-old friend and mentor, Rosa Lee (see “My Influencers” page). Lincoln Drive, an extremely curvilinear four-lane road is considered treacherous by most Philadelphians. However, I have a great time driving on it, pretending I’m burning serious rubber on a race-car track, even though I’m only going the 35mph speed limit.

It’s noon and there’s heavy traffic. I’m driving on the inside lane when I see a huge Lexus SUV come barreling around the bend at 65-70mph on the inside lane from the opposite direction. The car in front of it has stopped, waiting to make a left turn. The SUV is not slowing down and, suddenly, crosses the double yellow line, coming straight at me (my hands are getting clammy as I write). To avoid a certain head-on collision, I reflexively swerve into the right lane, bracing myself to be plowed into, wondering how many cars would be involved in the pile-up. The SUV hits the left side of my car in such a way that it sends it spinning in slow motion, while I am, again, expecting to be crashed into by other cars. I feel the centrifugal force much like being on one of those whirling rides at an amusement park. As I let myself go with it, I sense something remarkable, a palpable warmth enveloping me, like a soft embrace. I think to myself, wow, I’m being protected!

As soon as the car stops spinning, ending up facing the opposite direction, any feeling of divine comfort goes out the window. Panic sets in — my door won’t open. Fearing the car could go up in flames, I lunge toward the passenger’s door. Dazed, I manage to get out. All cars have stopped and people are coming up to me to see if I’m okay. I look back to see what happened to the SUV. It’s about thirty yards away and there are people crouched down, tending to the driver who is lying on the road. I feel something in my left ear. I touch it and see blood on my finger. A tiny cut was caused by a small shard of glass. Unbelievably, that is the extent of my physical injuries. I notice the airbags but don’t remember their being deployed. I walk around the other side to see the damage. The force of the impact was so fierce that the sheet metal of the outer passenger door is severely scrunched, and that of the fender entirely sheered off. Sirens are blaring. Two fire trucks have closed the road in both directions. The police come and one interviews me. Two EMTs are trying to convince me to go via ambulance to the hospital to be checked out. I decline and ask them the condition of the other driver. He is unconscious and has been taken to the hospital. They look at the damage and their eyes widen. One of them looks up at me and says, “You have somebody looking out for you.”

The other driver suffered internal injuries but survived. I sustained nothing more than the tiniest scratch. I was, however, diagnosed with PTSD – I couldn’t drive for over three months. I was a terrible passenger, jumping and gasping whenever a car crept up in my peripheral vision. Every time I looked back at the experience, knowing that I could have ended up mangled and fused with the wreckage, it takes my breath away. The cloak of safety that cocooned me as the car spun after being struck must have emanated out to the other cars around me. Witnesses, especially the police who see countless crashes, were astounded not only by my walking away unscathed, but also that not even one other car was hit after a forceful impact that sent two cars wildly careening into four lanes of traffic.

I will relate the second accident in the next few weeks, from the mountains of central Peloponnese, Greece. My cousins have graciously offered their cottage so that I can uninterruptedly work on my book proposal. I am returning home in mid-October.

Please feel free to comment and share your experience by clicking on the comment button under the title. I will have access to internet intermittently, so I may not be able to respond as quickly as I’d like. After posting the story of the second ordeal, I’d be curious to know which of the two seems more miraculous to you, or whether you consider them miracles at all.